[This is a reworked repost on TV medicine from my old site, Everywhere and Here, whose URL my boyfriend told me in no uncertain terms that no one would ever remember. And it’s true: Call Me Watson is much snappier.

In any case, I love TV, and watch rather too much of it. Here, I’ll review shows depicting medicine on TV as to its relationship to reality, and proximity to entertainment. Enjoy!]

Those four words alone should pique your interest, if not promise a certain level of quality. Also, the letters BBC. And the names Daniel Radcliffe and Jon Hamm. And in fact, it delivers.

What you wouldn’t be able to tell from the above is that this is set in snowy Russia, and is based on the notebooks of Mikhail Bulgakov, a doctor in the 1900s during the Russian Revolution and subsequent civil wars. He went on to abandon his trade for that of a writer’s (a man after my own heart indeed), most famously writing the masterpiece, “The Master and Margarita.”
This BBC miniseries follows a new medical school graduate (played by Radcliffe), who aces all his medical examinations and therefore – this being Russia – is rewarded by being promptly carted off to the middle-of-nowhere (more specifically, Muryevo) to run a rural hospital by himself. Jon Hamm plays his future self, recently released from a mental institution for an unknown reason, both recollecting his story through his notebooks and interacting with his younger self. It’s surprisingly hilarious while being surprisingly dark, which makes sense, since it is produced by the British.
Should you watch?
A
Most definitely, yes.
If you’re not watching for the gross medical stories that humans are somehow programmed to absolutely loving while cringing (in that car crash/trainwreck kind of way), then you watch to:
Is the medicine sound? A

Granted, I’m not incredibly familiar with medicine at the turn of the 20th century, having been trained in the medical knowledge of the 21st.
However, the operating theatre and the dispensary sets are convincingly vintage, resembling such things that I’ve seen in museums (ahem), the Internet, and The Knick (which will be another post of its own!)
Depressingly, the operating room lights don’t seem incredibly improved in design or concussion avoidance. 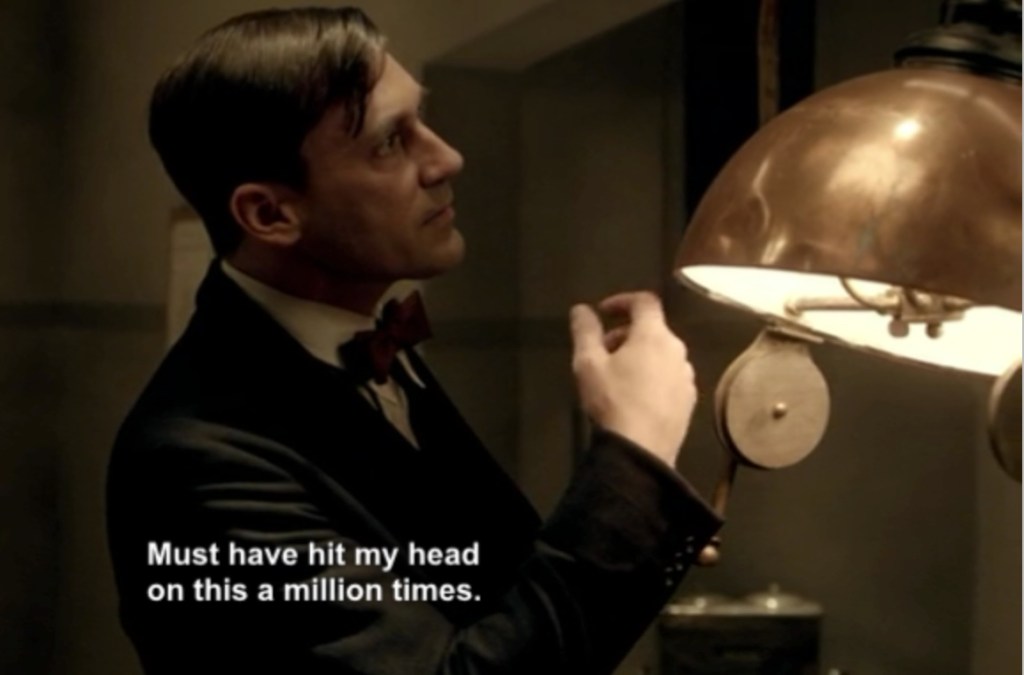 Black ointment, otherwise known as unguentum hydrargyri, were mercury-based ointments often used (up until 1955!) to treat syphilis, which JMVH hilariously notes was generally named after whatever enemy a country was fighting:

But the show’s treatment of obstetric emergencies such as:

that seems pretty on par for the period.

But even more true to life, the show has a surprising sensitivity to the unique combination of overwhelming emotions that immediately swarm doctors the minute we emerge from the hallowed halls of medical school – appropriately starry-eyed, fully textbook-formed, and totally unprepared.
This is universal to all medicine, from past to present:
If only to remind us of who we are when we started our journey into the field of medicine – and the fears and highs and lows that have never truly left us alone since – The Young Doctor’s Notebook is a great watch.
Also: It’s only a very British four episodes per season, and two seasons total, so you basically have no excuse not to watch.
Entertainment: A
Medical accuracy: A
Conclusion: A total gunner of a TV show (must see!).
Available to stream on Netflix.
cheers /c
Please follow and like us: