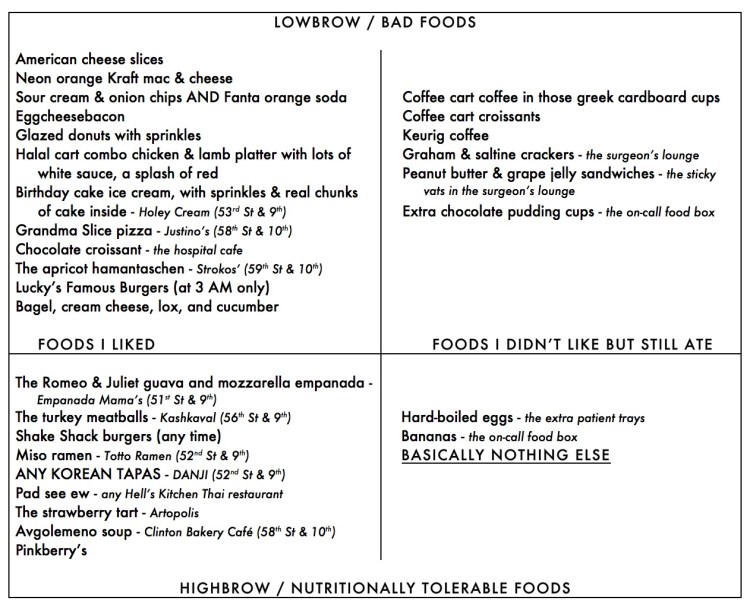 [Here begins another hopefully semi-regular series on life, love, and lack of life and/or love life during residency.

It is a map of the realities of life as a resident, an orange traffic cone pointing out the giant potholes in the seemingly smooth, post-med school, yellow-brick-road of residency.

It is a guide to things I wish I had known or done differently.

No, it’s not a comprehensive guide. And certainly, my experiences as an OBGYN resident may not be universal. But I do think that my experiences:

2) are applicable to most residents, regardless of the specialty

3) may help you anticipate and prepare for the pitfalls and problems you might encounter during residency,

4) might help you emerge a better, healthier, and more complete person and resident than I, Gunga Din.

So here’s to you! May you have a safe and successful journey to the Emerald City known as attending physician-hood.]

LETTERS TO A YOUNG RESIDENT

Lifestyles of the (Not) Rich and the (Un-)Famous, Part 1

It’s no secret that quality of life falls by the wayside during residency.

The hours you work, the lack of hours you sleep, the wages that barely reach minimum wage: all the extenuating circumstances that accompany the prestige of a residency in the field you have chosen inevitably contributes to some rather unhealthy habits.

For me, one of those bad habits involved my relationship with food.

Imagine, if you will:

You’re in residency, and

Now imagine: you’re in New York, in residency, and hungry, and there exists the enchanted ability to summon delicious foods from any corner of Manhattan with the mere touch of a finger.

This magic ability is commonly known as Seamless.

And now, you’ve got yourself a gateway to a bad addiction.

This is what happened to me.

Why go to the grocery store and cook when there’s Seamless?

Why walk to pick up food when GrubHub would bring it to me?

What’s an extra 2.99, 3.99, 5.99 delivery fee plus tax if I sit on my couch post-clubbing, mascara disheveled and aching feet up with heels askew, pick up the phone and get General Tso’s Chicken delivered to me at 3 am?

Slowly, the convenience and availability take-out delivery sunk its teeth into my lazy, slowly expanding ass.

What follows is ostensibly a list of times when I and my fellow residents would order food deliveries. In reality, it is a sad depiction  of laziness, lack of health, and sodium overload that accompanies a Seamless addiction.

To guarantee that everyone had time to look at the menu and place orders before any medical shenanigans could break out.

To lift both sagging spirits and blood glucose levels with the crisp smell of golden onion rings and chicken tenders wafting through the air of the labor and delivery floor, the lovely colorful sight of iced slices of cakes and strawberry-topped cheesecakes brightening both the early morning dusk and our strained eyes.

To order lunch to the inevitably packed labor floor, so that a forkful of salad or a bite of a turkey club could be snuck into the mouth in between deliveries and c-sections.

To order Pinkberry in cheerful white-and-lime cups, nestled between cool bags of rounded ice chunks and clear little containers of fruit and mochi, from the store two avenues away, as a treat for approaching the end of another day.

While crossing the street back to the apartment, barely avoiding a collision with passing cars while debating whether it’s an Indian or Mexican kind of night.

When, while bringing a soy-sauce-drenched dumpling halfway to my mouth, I suddenly realize that there’s nothing sweet in my house, leading somehow to the justification of spending a minimum of 15 dollars on 3 quarts of birthday cake ice cream to offset a 5.99 delivery fee.

When the 20 minute power nap before dinner arrives suddenly becomes three hours long, and fails to be interrupted by the loud pounding on your front door and four phone calls from the restaurant, and I still have nothing to eat.

When the only thing that will really wake you up is a cardboard cup of horrendous drip coffee and an egg-cheese-bacon (either on the classic bagel or, less traditionally, a Costco-esque croissant, a monster of a pastry the French would be horrified to recognize as related to their own), oozing fatty goodness into the aluminum wrapper.

I may have needed an intervention.

All of this came at a cost.

Such convenience is inevitably monetarily costly, especially on a resident’s budget.

Such food is inevitably unhealthy, regardless of how many salads you convince yourself will balance out the many 4 AM orders of fries and desserts.

The waistline inevitably suffers, from the compounding mathematics of lack of activity and surplus of food.

And none of this adds up to a happy or functional resident.

What then is the point of my story?

1) To amuse you with the extreme terribleness of my residency diet, certainly, and the extent of my addiction to that little red button labeled Seamless.

2) To inform my family and friends that my shockingly poor palate and questionable choice in favorite foods probably stem from deprivation and poor choices during residency, and I am not to be blamed!

(And probably from childhood, where I was fed Taco Bell chalupas as an afternoon snack before ballet – much love, Mom and Dad!)

And maybe, perhaps, to warn incoming and future trainees of how insidiously bad habits start during residency, and how temporary conveniences and comforts may not be overall beneficial to a residency state of mind.

If I could go back and advise my pre-residency self, here’s what I’d say.

Don’t be so afraid of missing out; it’s okay to prioritize sleep.That sometimes a few extra hours spent in sleep equals more alert, exciting times with friends later on. That a city like New York is always out there and waiting for you, even if you go to bed earlier at 12 am instead of 3, and get up at 8 pm post-call instead of at 2.

With thanks to The Lonely Island, and apologies to Drake:

YOLO, NO FOMO, that’s the motto.

That fresh food (and yes, it can be semi-prepared, not Food Network pretty, and need only a microwave or a Ziplock bag) is better for the body and spirit AND cheaper than take out. That a small chunk of cheese, some fruit, and crackers (+/- wine after work) can be a meal, and a quick and good and incredibly classy one at that.

Hands off the Seamless button. Or maybe don’t install it at all.

That it’s okay to treat yourself sometimes, the operative word being some – and not every – time. And that maybe food shouldn’t be treated as either reward or enemy, but with respect.

And now that I’m in fellowship, with more sleep and more time to become friends with fruits and vegetables, I can see really see the difference.

So learn from me, and don’t give in to the siren call of takeout. Your future self will thank you.