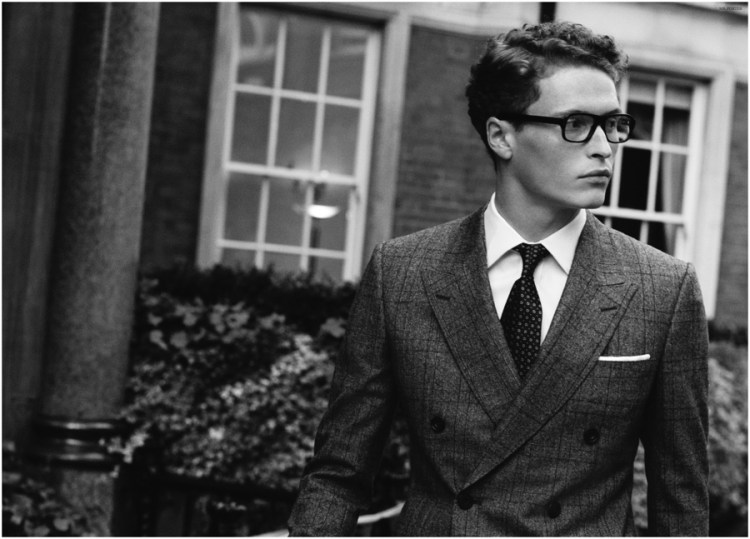 This is a little change of pace from norm.

But I suppose it has some merit in a relatively medical related blog because:

So, would you, dear men of the world, be interested in catching the attention of a pretty and intelligent woman with an altruistic heart, who will go on to earn a significant, stable income, and owns a white coat perfect for public and private use?

Well with great intelligence and beauty comes a lack of tolerance of the uncouth and ungodly.

So here is a Rx for Daily Life: A Guide to Gentlemanly Behavior.

So how do you approach a woman and get noticed without giving an impression of being a creep? First lines, first impressions. This can make or break you. Some general do’s and don’ts.

If she’s walking down the hospital corridor or sitting at a coffee shop with her computer in front of her, you can safely assume that she has somewhere to be and something to do. She’s not just sitting there looking pretty, wishing and hoping for a man to ask her out. So when you approach her, consider giving her a brief, open smile and an equally quick and lovely compliment. A Shakespearean soliloquy or a Byronic sonnet are both romantic, but much too long for the woman-on-the-go (and dude, you just met her.) But a “Hey – I couldn’t help but notice your gorgeous smile,” is something everyone has time for. 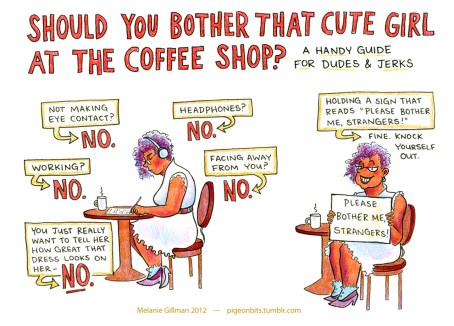 2. DON’T stalk her down the street.

If she’s walking or working, she’s busy. If your initial compliment and a subsequent follow-up sentence doesn’t stop her in her tracks or give her pause, let her go! She may be responding to be polite, but she is certainly telling you with her body language (and the pace of her steps) that she is not interested.

You’re not going to win her favor by continuing to dog her down the hall. Persistence is not always admirable. For single women who have to face the threat of sexual harassment and violence every day, this can actually be terrifying. She will not be listening to the sweet nothings you are saying; she will be looking for the next busy street or crowded shop that she can duck into for safety.

(Likewise, man who followed me silently for one long city block, then suddenly leaped in front of me to open the door to Starbucks? The gesture was kind; the execution, frightening.)

“You’re so hot,” “You’re gorgeous,” and “You’re beautiful,” may range from crass to relatively sweet, but none of them are particularly creative. Do you want to stand out, especially to a tired, overworked resident in scrubs who has seen it all? Then put a little effort into it.

4. DON’T insult her to get her attention.

This technique, also known by the stupidest term “negging,” was most famously described by Neil Strauss, a so-called pickup artist and author of “The Game.” The main objective is to lower the self-worth of a woman who would otherwise be potentially above your league by isolating from her friends, ignoring her, or subtly insulting her with unflattering questions.

I’m not going to bother linking to that monstrosity. I don’t care if it is potentially effective. This is incredibly insulting to women, who face enough scrutiny of their looks and intelligence in everyday life. Do not add to it. No woman worth her salt would stand for this, especially on a first encounter, much less an intelligent doctor who has gone through years of training and education and sexism to get to where she is.

5. DO watch the way you speak.

The tone and the words you choose matter in a first impression.

While women are supposedly less visual than men (or judge the opposite sex less on appearance than men do) , that first glance still matters. If you sport disheveled hairs on your face and head, and food stains on clothes that don’t fit right, you will be perceived as creepier and more unsettling than a guy with well-trimmed hair and proper, clean clothing. Women will not want to stop to listen to what you have to say. This may not be fair, but that’s life.

On the other hand, in this casual, non-committal day and age, dressing well is a bonus. Whether it’s a James Bond/Mad Man complex or not, no girl can deny the visual power of a well-fitted suit. Certainly I can’t.

Again, persistence is not always admirable. A respectful approach and a few kind words does not mean the woman is obligated to give you her number or her time. A smile or a response on her part is not necessarily encouragement.

Take a no for a no. Don’t insist on a date or getting her number if she declines the first time. Women are also reluctant to say no outright, so learn to read her body language. If she’s not taking off her headphones, if she says she’s really busy and running to meet someone, or if she doesn’t stop and turn to face you straight on, she’s probably not interested. That’s okay. There’s someone else out there who will. Respect her right to decline, and walk away like a gentleman would.

And truly, if you’re a gentleman, this doctor wishes you much success!

2 thoughts on “Rx for Daily Life: A Guide to Gentlemanly Behavior AKA How Not To Be A Creep”