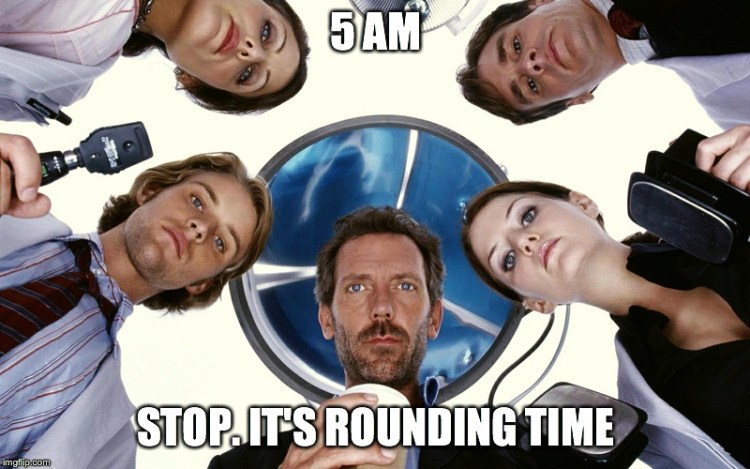 And I understand now, maybe not completely, but more, that in times of overwhelming joy, immobile sadness, hysterical laughter, absolute fear, and sometimes just perfect quiet there is Life. [And residency.]

/Dito Montiel, A Guide To Recognizing Your Saints [Added by me]

When the topic of my employment comes up, as it must inevitably do in the culture of American small talk, people become confused.

“You’re a fellow?,” they say, hesitantly, “…so that means you’re in residency?”

“You’re a fellow?…But I thought you were a girl.”

I’m kidding about the last one. But despite the continued popularity and abundance television shows and movies taking place in hospitals, confusion remains around the roles of the vast horde of people milling around the hospital who will inevitably meet you, poke you, prod you, and wake you up at 5 am to check on you.

It’s definitely a hard thing to understand, especially when you’re overwhelmed by your medical situation and the atmosphere of controlled, chlorinated chaos contained in a very sterile-looking room. Even those aforementioned shows and movies don’t identify hospital staff correctly – an intern as a resident, a neurologist as a neurosurgeon, etc – and it’s like commotion cordis every time.

So for all you filmmakers, for all you television writers, and for all who will eventually come face-to-face with medical staff of some sort, here’s a quick guide to recognizing your (hospital) saints (non-canonical, with all apologies to Papa Francesco): Doctor Edition

Medical students are still in school and are learning in the hospital by following doctors in different fields. They are not doctors, but they are training to become doctors. But though they are not physicians, they remain an important part of the team because of their eagerness, their compassion, and the time they spend with patients. They can often be seen in their short white coats, usually clean, but often overstuffed with books and papers.

All residents are doctors. They have graduated medical school, and have a DO or MD after their name. THEY ARE NOT, as some people like to say, students. They are, however, physicians-in-training.

Residency lasts anywhere from 3 to 7 years depending on the field (surgical fields >> non-surgical fields, of course). The first year of post-medical school training is known as internship, or intern year. After the first year of training, doctors are known as residents. Chief residents are either in their last year of training, or specially picked to stay for another year of residency and essentially manage the residency program.

KEY POINT: All first-year residents are INTERNS, but not all residents are interns. Interns are not to be confused with INTERNISTS, doctors in internal medicine.

They may look younger, and can often be found walking around in long not-quite-white coats with pockets filled with folded papers. Presence of the coats often causes high blood pressure in patients who claim to never have had high blood pressure before.

(Take it from me, OBGYN residents are not this put together and fabulous. But thanks, Hollywood!)

They may also be found running around in wrinkled, unfitted hospital-provided scrubs made for no natural human shape. (That’s another post)

In the hospital, you will likely spend most of your time with the residents. They are under-appreciated and their role is often misunderstood. They are not having sexy time in the supply closet or the call room; they are not falling in love with their patients and cutting their LVAD wires. (They don’t have time for that!)

They are the spine of the hospital; without them, the hospital could not run at all. They will be the first doctors to respond to emergencies, to spend time to talk with you, and to directly care for you. More importantly, they are the future of medicine.

They can be jolly good, but they aren’t merely British birthday boys. They are doctors who have finished residency, and could practice in their own right. However, they have decided to pursue additional training to gain expertise in a specific area, known as a subspecialty. These additional years of training are known as fellowship. They are also physicians-in-training, but they may have additional privileges similar to that of attendings: for instance, conducting surgeries by themselves, or making the primary medical decisions. They may also be found in a long white coat or scrubs, generally in better condition and and less paper than those belonging to residents.

Attendings are doctors who have finished residency or subspecialty training, and may practice independently. They are also finally able to pay back their debt and earn a decent wage! Wahoo! Their white coats are long, white, well-pressed, and likely completely unused.

Well, time and the field of medicine. The list above is not a hierarchy, but rather a network of colleagues able to bring different skills, time, and wisdom together to better treat you. In medicine, 5+ heads are better than one.

And since pictures are better than words:

In the next edition: KINGDOM: NURSES, and how to tell doctors and nurses apart (and why!)

One thought on “A Guide To Recognizing Your Hospital Saints: Doctor Edition”